Are School Gardens Here to Stay? 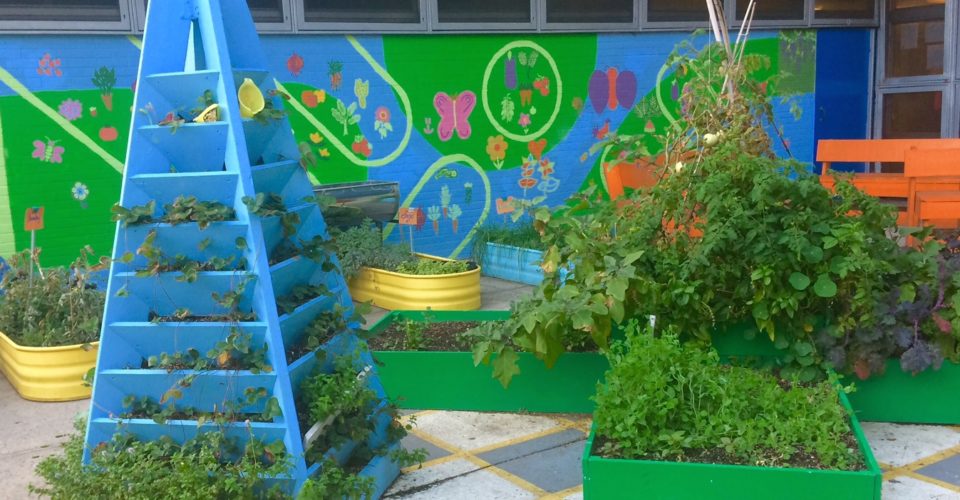 In early October Michelle Obama added a paved walkway to the White House Garden. Additional stone and steel elements were added to the grounds so that changing or removing perhaps her most prominent achievement would be more noticeable, if not more difficult.

Gardening, and specifically school gardens, has been a major element of Let’s Move!, the first lady’s signature campaign. The first lady went on a national garden tour in April, skipping the five boroughs but stopping at nearby Phillips Academy Charter School in Newark. The garden, as well as Obama’s Let’s Move! campaign, are a few of the many possible casualties of the upcoming election. And it begs the question – Are school gardens the new normal or is New York City school gardens in similar danger of going by the wayside as priorities change?

There are just under 600 school gardens in New York City’s 1800 schools, according to Grow to Learn NYC, a joint operation between GrowNYC, the city Parks Department, and the Department of Education’s Office of School Food (though the funding comes from the Mayor’s Office).

And players from various corners of the industry agree that the benefits of school gardens are numerous and well-known at this point. Physical activity, time spent outside, connection to food and healthier eating habits…the list goes on.

But does the increase in awareness, and the number of school gardens since Grow to Learn NYC was established in 2010, mean that school gardens in New York City are a permanent part of education in the five boroughs?

“I don’t know if there’s any guarantee in education policy as to what is here to stay…but I don’t believe that it is legislation that is driving these programs. I think it is teachers and parents, and kids,” says Jessie Kerr-Vanderslice, Director of Grow to Learn. “It’s still very grassroots or school-level driven. That speaks to the power of these spaces.”

Liz Engelberg is Director of Education for Edible Schoolyard NYC, the New York wing of Alice Water’s Edible Schoolyard organization, which is often credited with bringing the school garden “movement” into the public eye in the modern age.

But, she also says it’s likely that, like art and music in the classroom, proponents will never have to stop pushing to keep them around, and the more data the better.

“Data is hard in education and its hard in nutrition, so we are constantly refining what we should be collecting. We know that we have an impact on kids but it’s not always so easy to give numbers,” says Engelberg. “The thing that we are very successful in showing is that when the kids grow and cook the food with us they eat it, and we have very high numbers for that and the next step is, how does that change their lives?”

Both Engleberg and Kerr-Vanderslice agree the dream for these schools is to have a dedicated staff member for their garden program. FoodCorps, an organization that places young college graduates into schools to further good food initiatives offers a temporary solution to this problem. But it’s not a permanent fix, and through grant funding is available for school gardens, it’s rarely enough funding to hire staff.

Grow to Learn offers training and small grants from $500 to $2,000 for school-driven garden projects. Grants for “Farm to School” initiatives are also available through the United States Department of Agriculture (USDA) and New York State, but these are mostly focused on local sourcing of food served at school, not food grown in school.

The grassroots nature of most school gardens in New York City is both what keeps them somewhat tenuous but also keeps them from being at the mercy of legislature and fickle budget priorities.

That’s why Grow to Learn provides training not just on how to grow food, but how to grow an organization.

“That’s the biggest challenge. We call it the lonely champion. Being able to both build the community support at the school level and then understanding how to turn-key a space. I tell our gardeners all the time that they need to be politicians and community organizers first, and horticulturalists and gardeners second.”

Kerr-Vanderslice also said there’s a misconception that the primary aim of a school garden is to feed the students. For most garden projects, the scale simply won’t make a dent in the school’s needs. Gardens serve as science labs and history lessons – an equivalently valuable purpose according to Kerr-Vanderslice.

“There are some really well-funded school gardens, but most of the gardens are five raised beds, three super excited science teachers, two parents volunteers, and a warm bin [for sprouting seeds] in a class,” she said.

Hydroponic and other soilless methods of farming have been growing in schools, as they have in the general marketplace, and may offer the opportunity to contribute to the school food supply as well as academic endeavors.

Kathy Soll, founder and Chief Executive Officer of Teens for Food Justice, moved toward hydroponic growing due to the increased yield, and the different educational opportunities it presents, which range from mechanical engineering to chemistry (read more in our recent interview with Soll).

“I think people are attracted to the environmentally friendly components of hydroponic and attracted to the fact that it’s very clean,” said Soll, who also touted the food safety benefits that come from growing without soil.

Stephen Ritz, founder of the Bronx Green Machine has experimented with many different growing methods in his schools and classrooms but landed on a simple hydroponic system.

He told the NYC Food Policy Center in April, “I’ve really focused on scalable, replicable, year-round technology. In the old days, I was doing crazy, vertical walls, and green roofs. Now I’m focusing on in-class, scalable gardening projects that involve a lot of academic learning so that kids can get the connection between resources and they’re excited to be farming in class. While I am known for huge projects, I am really focusing on tower gardening, small-scale projects in class that have a big impact and are student-driven.”

At Philip’s Academy Charter, the public charter school that Michelle Obama visited in April, Frank Mentesana, director of the food and farming project at the school, has both an aeroponic farm (in the cafeteria no less) and a rooftop garden, but believes that teaching cooking skills and healthy food choices supercede either of those.

This element is related more to curriculum, which all the actors we spoke to for this story agreed, would represent a coup for Farm to School supporters, should school gardens be worked into a local or nationally mandated curriculum.

In the meantime, Mentesana is taking advantage of a boon of grants available for his work but is wary that they won’t last forever.

Grow to Learn NYC is a strong example of municipalities offering support to school gardens, but without curriculum integration, or funding for dedicated staff, school gardens are still left to the volunteers and teachers who champion them. At 600 strong this may not seem like a deficiency; some see it as a feature.

Hillary Clinton has pledged to maintain and possibly expand the White House garden. Donald Trump has yet to state what he would do.